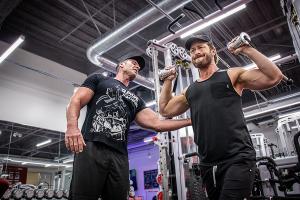 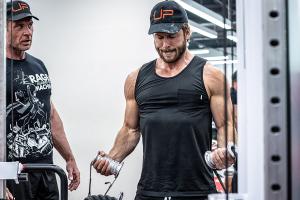 Glen is a very dopamine-driven guy that loves high energy, hard, all-out exercise. And that speaks to my soul. He went all-in, and he achieved tremendous results.”

Shooting for the film began in 2018, and Glen had just seven weeks to get into incredible shape for a sequence in which he is seen shirtless playing American Football– a homage to the iconic volleyball scene in the original film.

Glen wanted to reduce his body fat, build broad shoulders, a muscular chest and sport a chiselled six-pack for the sequence. To achieve this, he enlisted the expertise of Ultimate Performance (U.P.)

To ensure he was in absolute peak condition, Glen partnered with U.P. founder and Global CEO Nick Mitchell. Nick is widely regarded as the world’s leading personal trainer and founded U.P. in 2009. He has since overseen the expansion of the business, which now has 20 gyms operating in nine countries and four continents.

And Nick, who was born in Yorkshire, stepped out of the boardroom and back into the gym to personally train Glen at U.P.’s Los Angeles facility.

Nick said: “The brief was to get Glen to look as good, and as lean, as possible in a very short space of time.

“We analysed what the ‘money shot’ would be. What would make Glen pop on camera. So, we concentrated on his ‘mirror muscles’ – chest, shoulders, traps, abs.

“We couldn’t build massive muscles in just seven weeks. But, what we could do is make Glen look leaner, sharper, crisper, and give him a look of strength and power.

“You will always get people saying: ‘It’s easy for a pampered celebrity to get in shape.’ Don’t be stupid. Glen was part of an ensemble cast in one the biggest Hollywood films in decades, starring alongside Tom Cruise, the biggest movie star in the world. His life wasn’t his own.

“And so were always rushed. We only had three or four hours a week a week to train. But Glen is a very dopamine-driven guy that loves high energy, hard, all-out exercise. And that speaks to my soul. He went all-in, and he achieved tremendous results.

“It really was genuinely great fun, and a genuine pleasure, to train Glen. It was uplifting to be on the gym floor with. He is the most upbeat, positive person you’d ever wish to meet.”


EIN Presswire’s priority is source transparency. We do not allow opaque clients, and our editors try to be careful about weeding out false and misleading content.
As a user, if you see something we have missed, please do bring it to our attention. Your help is welcome. EIN Presswire, Everyone’s Internet News Presswire

,
tries to define some of the boundaries that are reasonable in today’s world. Please see our
Editorial Guidelines
for more information.

January 3, 2022 Comments Off on Health and fitness essentials to help you tackle your New Year’s resolution | CNN Underscored

How Over-exercising Can Be Bad For Your Mental Health

February 10, 2022 Comments Off on How Over-exercising Can Be Bad For Your Mental Health