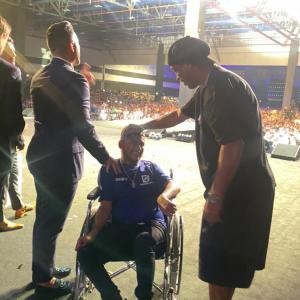 Ronaldinho blesses a specially challenged fan at a Panama Event 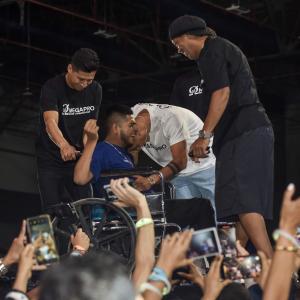 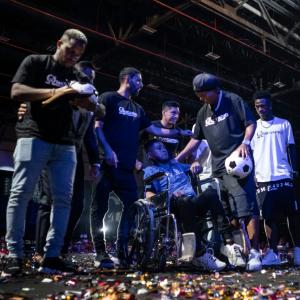 In a set of viral images, Brazil’s Football Legend Ronaldinho and Argentina’s Superstar Dybala lift a specially abled fan on stage and hug him.

On 10th June, Panama City observed the biggest event ever hosted in the Panama Convention Center by Global Marketing Pioneer OmegaPro that’s known for its affection and admiration towards the beloved game of football. In an event crafted to deliver a remarkable experience that combined both education and entertainment, this momentum was titled ‘Rise’, OmegaPro’s very own Global Convention involving members flying into Panama City from over 20 countries representing the most unique ethnicities. To spice up the already blockbuster set of two days buzzing in the Tropics of Central America, OmegaPro surprised its huge audience with a rally of football’s biggest former and current legends – effectively bringing the 10,000+ audience to their feet.

Brazilian and Barcelona Great Ronaldinho was one of the most notable in attendance – this was Ronaldinho’s second appearance since winning the OmegaPro Legends Cup in Dubai in football’s first ever game played under the world’s tallest building, Burj Khalifa.

While addressing the audience, Ronaldinho observed a fan on a wheelchair cheering on from the depths of the crowd and with the help of Mexico’s Ricardo Osorio pulled the lucky fan’s wheelchair right up to the stage with delicate care. Stunned with shock and disbelief, the fan was seen shaking and crying in happiness as Ronaldinho himself pushed his wheelchair to the center stage, hugged and spoke to him. The whole auditorium was on its feet cherishing a moment that defined that, your disabilities, your shortcomings cannot define you.

Argentinian heartthrob Paulo Dybala soon joined the hurdle and gave the fan a kiss and a tight hug as rest of the footballers – Germany’s Kuranyi, Real Madrid’s Vinicius Jr cheered on.

Proving sport as the biggest equalizer of them all – this beautiful moment was one for the memories, for the photo frames and for one lesson – nothing in life can truly stop you, without yourself. Ronaldinho, Dybala, Vinicius and Co. proved to truly have hearts of gold.


EIN Presswire’s priority is source transparency. We do not allow opaque clients, and our editors try to be careful about weeding out false and misleading content.
As a user, if you see something we have missed, please do bring it to our attention. Your help is welcome. EIN Presswire, Everyone’s Internet News Presswire

,
tries to define some of the boundaries that are reasonable in today’s world. Please see our
Editorial Guidelines
for more information.

January 2, 2022 Comments Off on Potato milk and dream therapy – the health trends to watch in 2022

Even If You’re ‘Too Busy’ To Work Out, Here’s How To Squeeze It In